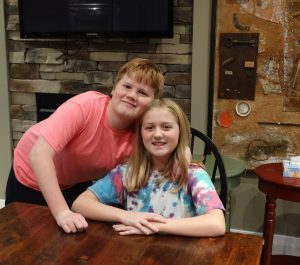 A diagnosis of cancer in a family impacts every single member of the household in different ways. With that in mind, Wellspring recently developed the Parents’ and Children’s Program in an effort to provide support to children who live in a household where one of the parents or guardians has cancer.

Well on the Way recently had the pleasure of talking with two young members, Evan, 13 and Claire, 11, who attended the program along with their parents, at Wellspring Birmingham Gilgan House.

“I didn’t know what the program was going to be like,” says Claire. “But I really liked it, and it helped me open up and feel more confident.”

“I liked that all the families got to eat together at the start of each session,” says Evan. “It was nice to talk with the other moms and dads and kids, and find out about what they were going through. I always knew cancer was out there, but I also learned that all cancers are different. It was cool to hear from other families and I liked being able to talk to others about how all the parents are doing. I became excited to go to the group every week.”

Both Evan and Claire agreed that prior to attending the program they felt they were alone in their situation.  But the activities they did in the program each week helped them be more comfortable sharing information about their own feelings, as well as asking questions. “We all became friends,” said Claire. “Everyone could relate to each other. If someone in the group was feeling sad that day, we could all help make that person feel a bit better.”

Learning coping strategies is a big part of the program experience. Prior to participating in the sessions, Evan said that with his mother’s cancer on his mind, he often cried when something upset him. But after attending the 8-weeks of sessions, he says he learned how to mentally process things, and talk about his feelings. Claire on the other hand, learned that journaling was a good way for her to express her feelings.

Collectively, Evan and Claire both felt that the program had brought the family closer together at home. “Every week it got better and better for us. We learned new things and talked about them as a family. We are so much more aware now,” says Evan. “Now I want to play board games together rather than doing our individual things. We want to do more together as a family and feel more connected.”

When asked if they would suggest the program and Wellspring to other children in a similar situation, they both said they absolutely would tell them to come to Wellspring. “We are all in it together,” says Evan. “It is like a second family and it helped us learn ways to cope.”