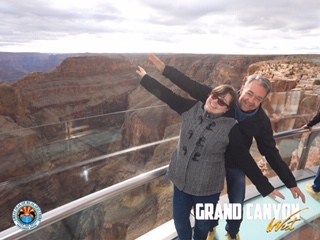 Sometimes, the best things in life, like falling in love, can happen when, and where, we least expect them. Just ask Kathryn and Vern. Theirs is a tale that began with cancer and ended in a story of love. While Kathryn doesn’t recommend this as the ideal way to meet someone new, they both agreed that Wellspring was the common ground that provided them with the safety and strength they needed to pursue their relationship.

Both Kathryn and Vern had been participating in programs at Wellspring Downtown Toronto, their paths crossing only infrequently. Both had given up on the thought of finding a life-partner, each instead more consumed by the isolation that came from their illness. Vern was living with Stage 4 Non-Hodgkin’s Lymphoma and Kathryn, a much more complex and extremely rare form of cancer named Well-Differentiated Papillary Mesothelioma.

Kathryn and Vern had enrolled in the Cancer Exercise program but attended the program at different times. Kathryn would take other Wellspring programs, then typically stay at the Centre for lunch, and that was how they met. “At first, it was just a nod, a hello, conversation with a group of people,” said Kathryn. “I thought he was a cutey.”  Little did they know what was to come.

As Vern was preparing to return to his work following an extended absence, he was concerned, felt anxious and mentally preoccupied. He reached out to Kathryn, a friendly face, to talk. After all, the two shared a common bond. They both understood the cancer experience, and that Wellspring was a safe place to share both the good days as well as the bad.

Once they began talking, they couldn’t stop. They were in sync, both part of the same story, but at different pages in the book, recognizing their similarities and understanding their differences without having to apologize or explain.

Their talking led to dating, which led to a proposal that occurred at Vern’s retirement party last spring. The couple plan to be married on February 29 with festivities continuing throughout the weekend.

The happy ending for Vern and Kathryn continues, as both have now been declared cancer-free.

Because Wellspring was so instrumental in helping them through such an intense emotional and physical journey, and “saving their lives’ as they describe it,  Kathryn and Vern will be having their wedding photos taken in the gym at the downtown centre, and in place of wedding favours for their guests, will be making a donation to Wellspring in recognition of their special day.

If you would like to be part of this special celebration of love and make a tribute donation to Wellspring in honour of Vern and Kathryn’s wedding, please click here.